On the strategically important and attractive area between the highest mountain of the Dinaric range Orjen (1895 m) and the entrance to one of the most beautiful bays in the world Bay of Boka-Kotorska, lies the youngest medieval settlement at the Adriatic – Herceg Novi. 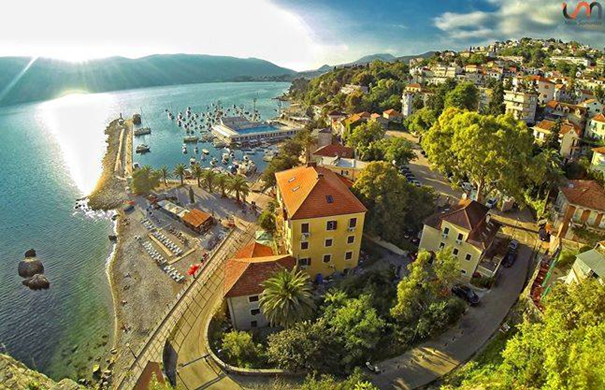 Across Herceg Novi, at the entrance of Boka Bay, there are located three strategically built fortes intended for the city defense. Fortress Arza is situated at a distance of 1 nautical mile from the fortress Mamula, the namesake Cape Arza (Arza di Punta). Together with the fortress Mamula and Prevlaka, on Cape Ostra (today belongs to Croatia), served as a shield unwanted entry into the Bay of Kotor. 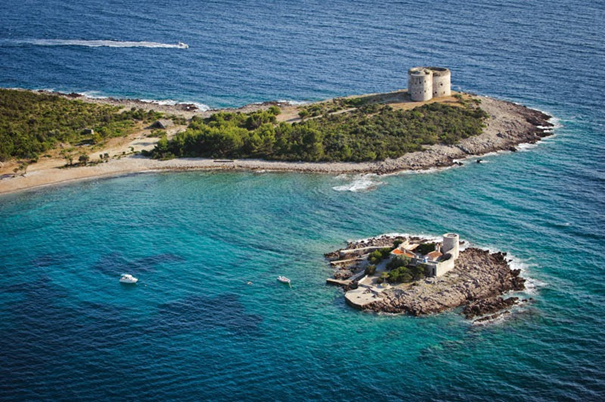 Herceg Novi Riviera has extremely rich and varied horticultural potential which is conditioned by a favorable climate, geographical position, relief and configuration of the terrain.

This small town, often called the city of the Flowers and the Sun (because of its diverse flora and more than 200 sunny days per year) has 30.000 inhabitants, and it is also known by numerous music and art festivals. 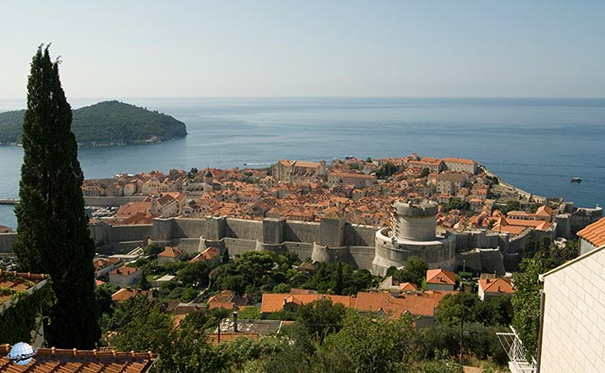 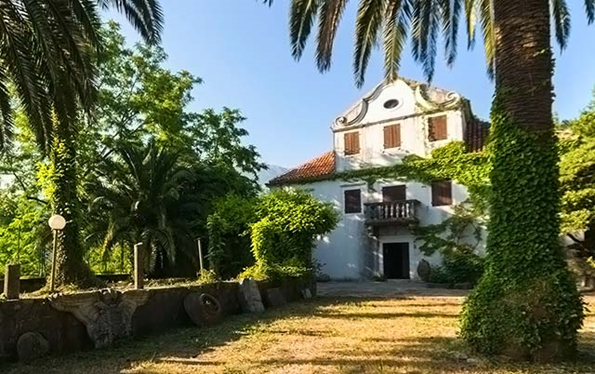 The domination of several fortresses which are bear witnesses of turbulent past indicate the defensive role that the Old Town had. Their names Kanli-Tower, Forta mare, Citadela, Španjola, point to the period of the time under the rule of various conquerors. Today, they are open-air stages where film, music and flower festivals are held.

Kanli Kula (Bloody Tower, Porte di terra), erected after the re-occupation of the Herceg Novi (1539) by the Turks. In its lower part, on the west side, the fort had a cistern, which was later used as a prison. 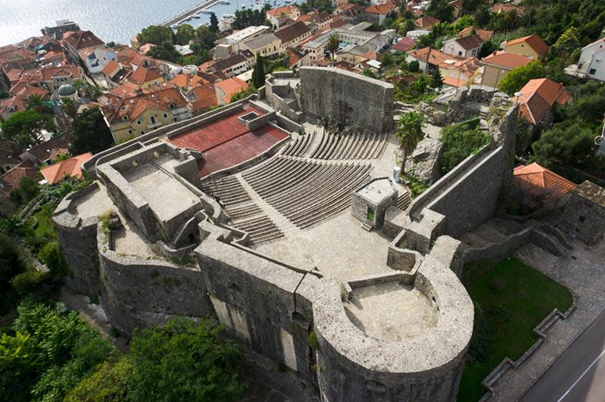 The tower was repaired after the earthquake, and today it is one of the most beautiful summer stage, not only on the Montenegrin coast, but also on the entire Adriatic. Summer stage receives over 1,500 spectators, and today it plays host to cultural and artistic events. Fortress is directly related to the Upper Town. 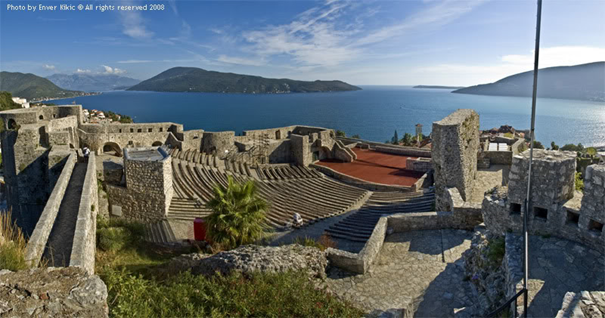 Spanjola Fortress was built by the Spanish army in 1539, although there is suspicion that the fortress could be built for less than a year. Anyway, after the takeover by the Turks, Spaniards, during their short, one-year rule, renovated town fortresses and towers. Thus, Španjola was rebuilt, as it is called by the local population, although in written records (maps and engravings), it is written the name "Upper Town". 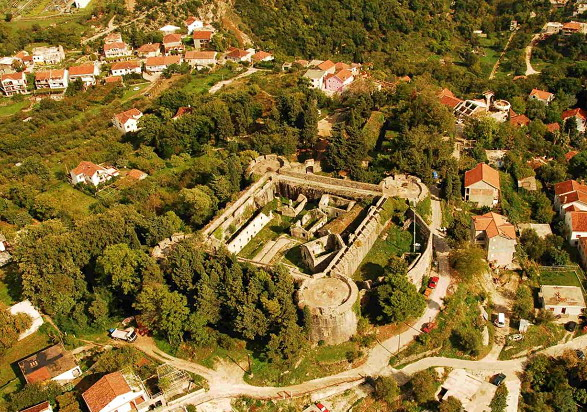 From the fortress to the city led the underground path. The appearance of the current fortress is related to another period of Turkish rule (since 1548), when the Turks demolished the lower fortress and built a new one. This is evidenced by oriental architecture and Arabic inscription over the entrance to the fortress. The fortress is situated on a hill Bajer, on the north side of town, at an altitude of about 170 meters.

The fortress offers a magnificent view of the entrance to the Bay. Although the fortress changed masters, largely retains its original shape.

Forte Mare (Forte dei mare) or sea fortress was built by the sea, on a solid sea rocks. In the fortress are preserved remains of fortifications from the period of the Bosnian reign. At the foot of the fortress is a source of water to the fighters of the Holy League (Venetian, Papal and Spanish state) in 1687, used, leaving the city without drinking water, and thus accelerated the conquest of the Herceg Novi. 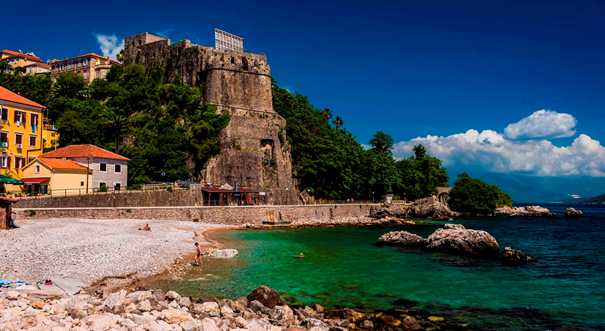 On the marble plaque that is located above the source, are carved the most beautiful verses, which are devoted to Boki, the verses of the poet Aleksa Šantić from 1906. 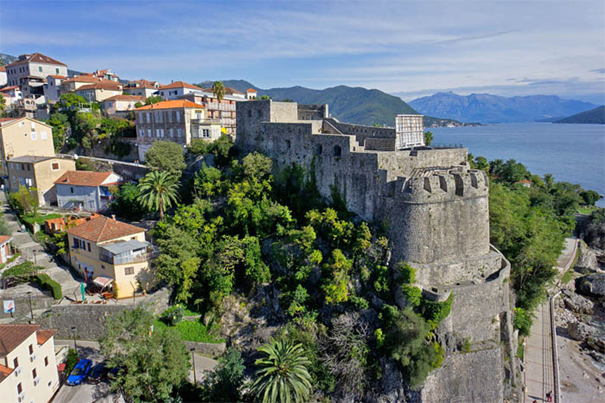 With its architectural integrity fortress dominates the town. In the summer period is used as a cultural and entertainment scene (summer cinema, night club, etc).

On charts is known as the Swallow, but its generally accepted name is Mamula, after Austrian general Lazar Mamula who fortified it in the mid 19th century. Mamula is an uninhabited island at the entrance to the Bay of Kotor, away from Herceg Novi 3.4 nm. It is circular with a diameter of 200 m, covered with low vegetation, with its beach and pier on the north side. During both world wars on the island was a prison and as a memory of this period placed a memorial plaque. For the revival and tourist valorization of this extremely attractive islands were made a few projects, but none so far has not been realized. Mamula is still deserted island, but also a favorite summer getaway. 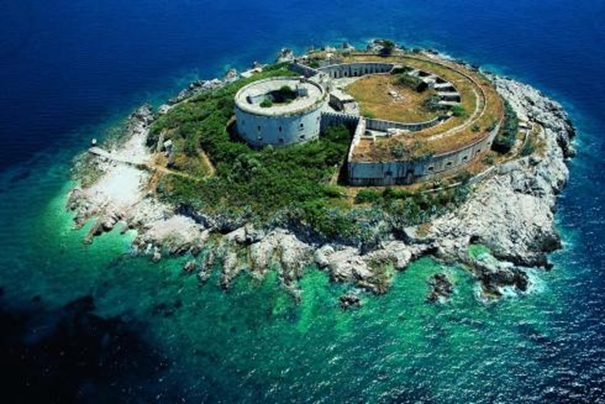 Blue Cave (Plava Špilja) is one of the most attractive places in the series of caves located on the peninsula Lustica. This nature masterpeace is distante from Herceg Novi 5.7 nm. There are two openings at an angle of 45 degrees, the height from sea level to the top of the ceiling is 9 m, a depth of 3 - 4 m. Its name comes from the unusual blue color during the sunny days, the reflection of sunlight reflected by the surface. Visit this cave is compulsory part of the excursion tour through the Bay of Kotor, and in it can be visited by regular boats. 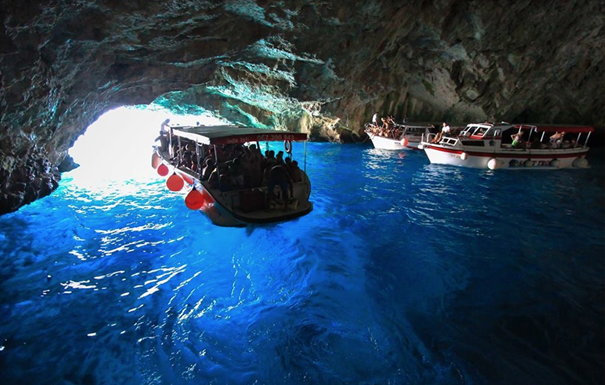 Archaeological finds from the caves Vranjaj and Luštica Peninsula, are bear witness to the beginnings of civilization in this region since the Neolithic and early Bronze Age. Vranjaj Cave, which is located in the mountain massif of Orjen above the spring of Dizdarica, today is the oldest archaeological site from prehistoric this area. It reveals the site of prehistoric cultures intertwine phase.

In the 3rd century BC, after the victory over the Illyrians, this region has gripped the Roman Empire.

After the fall of the Western Roman Empire in 476, this region is dominated by the Byzantine Empire. Slovenian tribes densely inhabited this area in the seventh century, a period when the ground Byzantium sprout first country - parish, initially dependent on the Byzantine Empire, and later gradually gain independence and political autonomy. 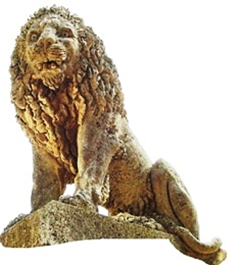 In the area around today's Herceg Novi is formed Župa Dračevica. Ever since the 10th century, the state of Dračevica loses its independence, becomes the prey of the Zeta princes, but not for long because it follows an era of Serbian Nemanjić dynasty. After the death of Emperor Dušan, the state of Dračevica, for short, the government of prince Vojislav Vojnovic, then to Montenegrin royal family of Balšići.

In order to give Bosnia outlet to the sea and to apart from the port of Dubrovnik (all the goods, spices and salt were shipped directly to Dubrovnik and were extremely expensive), Bosnian king Tvrtko I Kotromanić occupies State of Dračevice in 1378. 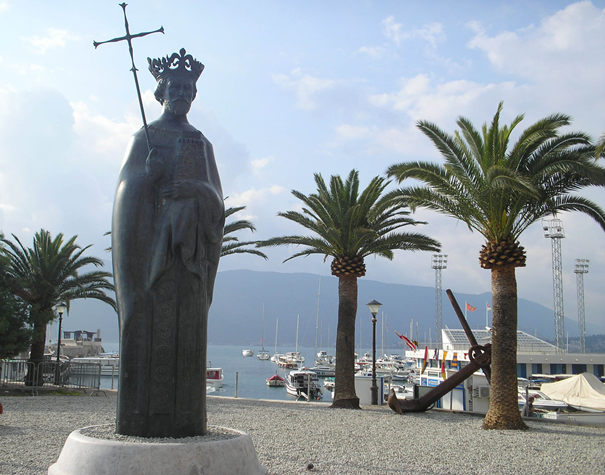 On a small coastal hill establishes a new town in 1382 with the intention of developing it as an important commercial, maritime and craft center and gives it the name St. Stephen (Sveti Stejepan). As one of the youngest cities on the Adriatic coast, many called it Novi, Castrum Novum, Castel Nuovo (meaning New Town).

Its present-day name establishes during the reign of Herceg (Duke) Stephen, when the town experience the greatest growth and development. There is a strong development of weapons, jewelers, blacksmiths and shoemakers trade. For this period are preserved significant examples of the goldsmith's art that are kept in the Treasury of the Savina Monastery.

Herceg Stjepan inherits his son Vladko, but in spite of fierce opposition fails to resist the Turkish army in the attack in 1482.

Turkish conquest begin a new period of history Herceg-Novi. Turks undertake extensive work on the fortification of the city. There are plenty of indications that Fortress of Španjola (Spanish fortress), which dominates the surrounding area, was built by the Ottomans. 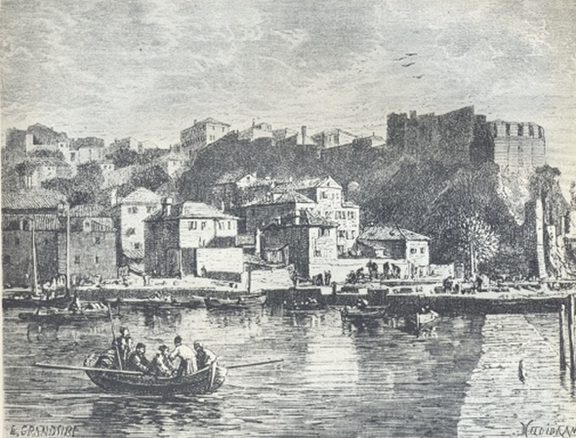 The fleet of Spanish Admiral Andrea Doria suddenly came to Herceg Novi in June 1538. The next day the Turks surrendered the city to Spaniards, who left a crew of 6,000 people. Recognizing the importance of the fort that dominates the town at the highest elevation, the Spaniards immediately started correcting the ramparts and entire fortification. Among the local population, the fort was named Španjola, although the largest number of documents it is called Upper Town (Gornji Grad). Just nine months later, in July 1539, the Turkish admiral Hajredin Barbarosa with a vast fleet overwhelmed the city, after a long and difficult struggle. 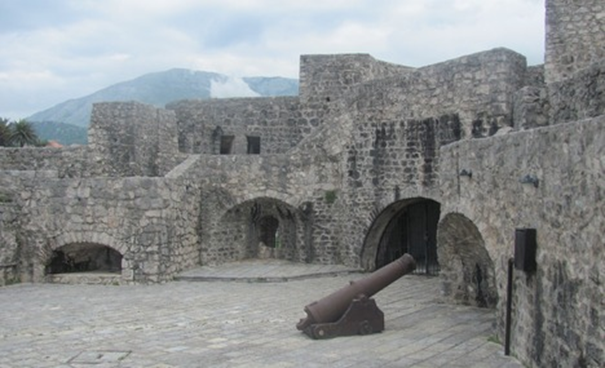 According to the testimony traveler Evlija Čelebić, who visited Herceg-Novi in ​​1664, the town was shelter and storage of foreign pirates, as well as the transit point for the slave trade.

The earthquake that hit Dubrovnik in 1667, has brought great destruction and Herceg-Novi. That same year the Turks start the reconstruction of the city, but increasing pressure of the Venetian Republic and its allies obligate Turks to return Herceg to Christian hands.

After 30 days of fierce fighting, 30 September 1687, after two centuries of Turkish rule, the Venetians finally seized the city led by the chief eunuch Jerome Corner, and immediately approached the reconstruction of destroyed fortifications. 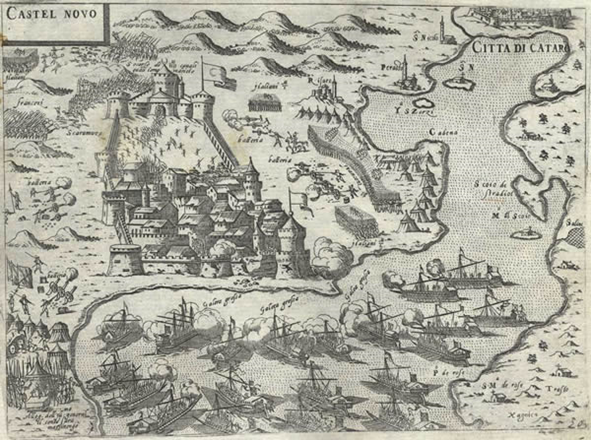 Venetians ruled until the fall of the Venetian Republic in 1797. Since then, there is a frequent change of government in Herceg-Novi.

The Austrians stayed until 1806. At that time, Herceg-Novi from the original commercial function, I assumed the role of a strategic defense of the entrance to the Bay of Kotor, as history later confirmed.

After that, the control was taken by the Russians in 1807, and then the French. On 14 October 1813 People from Boka and Montenegro, backed by the British, occupied the town new and kept it until the 6th of June 1814, when it was occupied again by the Austrian army, after the strong and heavy fighting.

Until 1918 the city was under Austro-Hungarian rule. 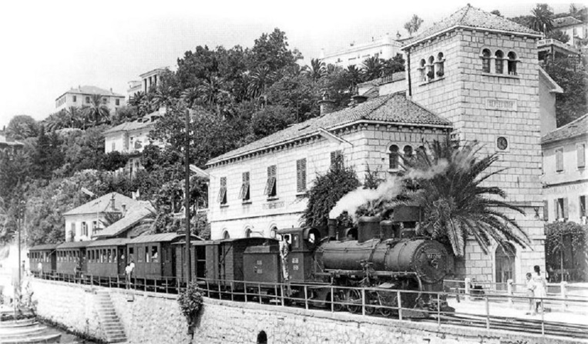 Then comes the unification of Serbs, Croats and Slovenes to the Kingdom, and later in Yugoslavia. After the capitulation of Yugoslavia in 1941 as occupiers were Italians and then the Germans.

Herceg-Novi was released on 28 October 1944 and that date is now celebrated as Liberation Day and the Feast of the city. 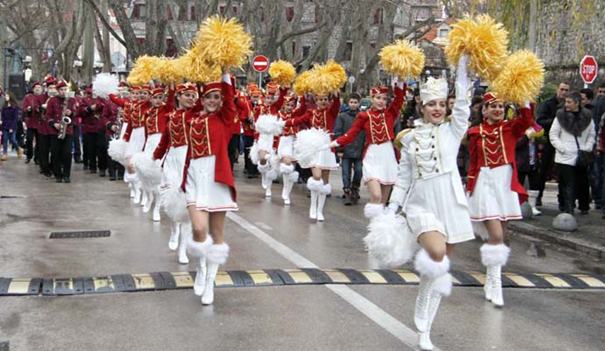